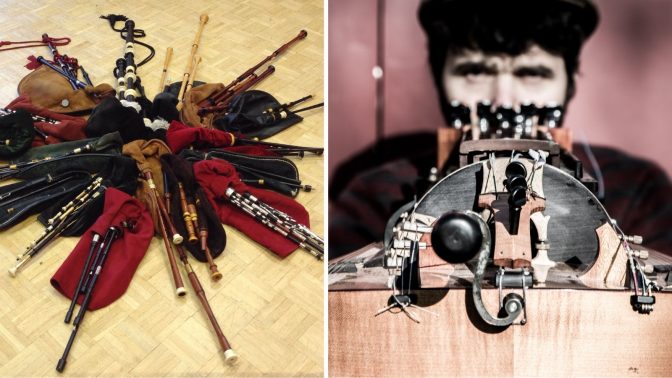 This gig is likely to sell out. It is unlikely there will be any available on the door. So please buy your ticket in advance.

Join us for perhaps the most vibrant gig of the year at Halsway Manor. More pipes and gurdies than you can shake a stick at! Tutors of international renoun are coming to Halsway to lead the popular Pipes and Gurdies weekend. You can experience their magic at this concert performance by Birgit Bornauw, David Faulkner, Efren Lopez, Isabelle Pignol and Scott Marshall.

David Faulkner has been playing pipes for over 25 years with groups such as the Eel Grinders and Jon Swayne’s Zephyrus, and performs regularly as a duet with accordionist Steve Turner. He has toured in Europe, Canada and America.

Birgit Bornauw (Belgium) teaches bagpipes, ensemble playing and music history at the Ghent Conservatory and the Ypres Muziek Academie. She discovered the bagpipe at the age of 15 and trained at the Leuven Lemmens Institutes (LUCA – School of Arts) in baroque musette and bagpipes. After an appearance in the eighteenth century orchestra of Frans Brüggen, she devoted herself to traditional music with the BBGE (Belgian Bagpipe Groove Experience) and Transpiradansa. She is also a founder member of the Griff project and “Bag Pipe but no kilt”. Her groups include: Bon matin a concert and bal group that works on the repertoire of  Brittany, Poitou, Wallonia and Flanders. The Muzikaciné Collective, dedicated to the cine-concert. The Duo concerts inspired by baroque music (It’s Baroque To My Ears). The Amazing Airbags and Ensemble Tormis, a collective of artists who devoted since 2001 to the study and interpretation of ancient music.

Claire Dugué, (France), encountered the hurdy-gurdy in London during her college training as an instrument maker. She was captivated by the instrument and has been making hurdy-gurdies ever since, producing quality instrument for amateur and professionals alike. Claire has now taken over the organisation of the weekend from Paul James and will be hosting the event and be also at hand to help with the technical aspects of setup and maintenance.

Efren Lopez (Spain) is an exceptional multi-instrumentalist and composer specialising in folk and early music from around the world. He has been a part of artistic productions for a myriad of bands as well as singer-songwriters.

“always in search of the most surprising, massive and turbulent sounds, from the wildest to the wisest“

Scott Marshall (England) has been playing hurdy gurdy since 2005. Soon after he helped to create the UK Gurdy forum and subsequent festivals. In 2017 he recorded his first album Gurdymania, followed in 2018 by Gurdymania 2, using multiple Hurdy-Gurdies and effects units. He will be teaching the beginners class at Halsway focusing on solid playing skills and core repertoire.