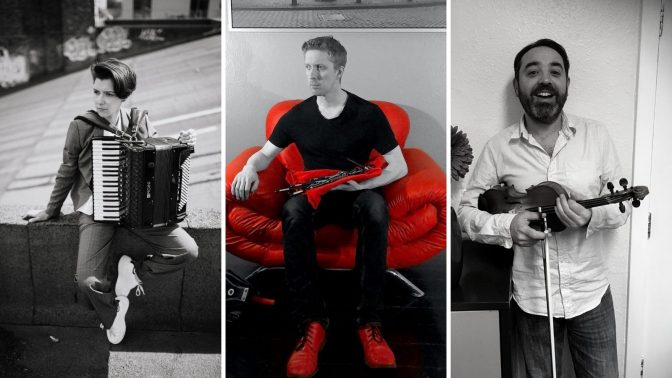 Join Andy May (Andy May Trio, Baltic Crossing, Jez Lowe & the Bad Pennies) with guest artist Paul Sartin (Belshazzar’s Feast, Faustus, Bellowhead) and Amy Thatcher (Kathryn Tickell Band, The Shee, Monster Ceilidh Band) for an enjoyable and accessible introduction to writing your own ‘folk’ tunes. Packed with tips and exercises to aid your journey from idea to performable tune. The course is aimed at novice composers, but if you’ve some experience there will be plenty for you to benefit from as well.  Andy, Paul and Amy will be your guides through the composition process, from looking for inspiration both external and internal; translating those concepts into music and putting them down on paper (where appropriate); crafting melodies and addressing technical issues; and preparing the tunes for performance. Paul is also happy to address setting existing words to new music.

Musicians (any instrument) of an intermediate level and above; you’ll need to be able to play your own tunes! You don’t need any prior experience of writing tunes. A familiarity with reading / writing notation will be beneficial in getting the most from this course. If you have queries, please get in touch.

Andy May is generally considered to be one of the finest exponents of the Northumbrian Smallpipes. He was introduced to the instrument as a child by his father and was taught by Roland Lofthouse (himself a pupil of Jack Armstrong) and Adrian Schofield. He then continued to be inspired by pipers Billy Pigg, Tom Clough and many others. Early in his career he achieved nine consecutive wins of the Northumbrian Pipers’ Society Open Competition, studied piano at York University and now tours internationally as a member of Jez Lowe and the Bad Pennies, Baltic Crossing and The Andy May Trio.

As a teacher, Andy May has many helpful approaches to both technique and musicality and has led workshops all over the world and teaches Northumbrian and Uilleann pipes and piano at Newcastle University.

Paul Sartin is a singer, oboist, fiddler, member of Belshazzar’s Feast, Faustus (Preis der Deustchen Schallplattenkritik 2017) and the late BBC award-winning Bellowhead. Paul directs the Andover Museum Loft Singers, and arranged Community Choirs Folk (Faber Music). A BASCA-nominated composer, recent commissions include work for the BBC, RSC, Aldeburgh Music, Streetwise Opera and the Southbank. He arranged and MD’d The Transports (Guardian *****), and Anthony and Cleopatra, As You Like It and Cymbeline for Central School of Speech and Drama. He is a recipient of a 75th Anniversary Award from the English Folk Dance and Song Society.