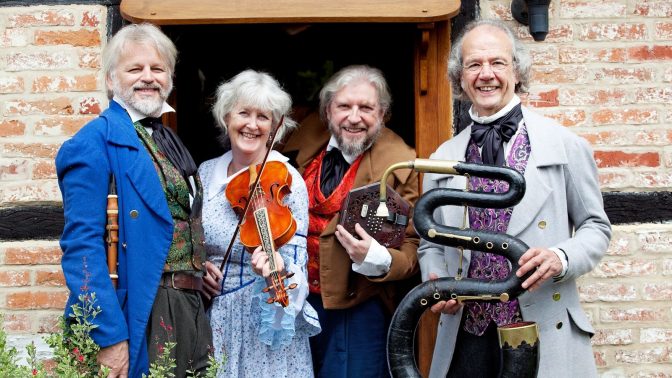 Due to Covid-19 we are closed until 1 Feb 2021. We are therefore unable to run this course. We hope to welcome the Mellstock Band back in 2021 – please contact us to transfer your booking, or to arrange a refund.

The Mellstock Band invite you to join them for a weekend of music and song from the West Country, as immortalised in the poems and novels of Thomas Hardy. For over thirty years Dave Townsend and the band have been resurrecting his musical world, finding forgotten gems of vocal and instrumental music from village musicians’ manuscript books and the early folksong collectors. Hardy and his family were active local musicians with their own collection of song and dance manuscripts, and Hardy noted down songs from his family and friends.

West Gallery Music:
In Dorset, as in most parts of England, for some hundred years from about 1740 onwards, groups of singers and instrumentalists played and sang in the gallery of their village church and went round the parish at Christmas to sing carols. Hardy describes a mix of powerful voices, strings and wind instruments, and the music is alive with vigorous rhythms, soaring counterpoint and strange harmonies. Don’t worry if you can’t read music or have never sung in a choir – we’ll go through all the parts and think about the best style for singing this vibrant tradition.

Village Band Music:
As well as the tunes for dances, marches and songs, there are harmony parts which show how the old bands arranged and played their music, and so we can reconstruct the sound of a nineteenth-century village band.

Wessex Songs:
An opportunity to sing some of the traditional songs associated with Hardy and his family. Alongside the church music, there are a range of convivial songs which were sung in harmony, some found in Hardy’s father’s song-book.

The music can be performed effectively by almost any group of singers and musicians. Early accounts indicate that they were adapted to whatever forces were available, whether mixed or all-male groups, with the vocal parts re-assigned accordingly. Instruments regularly used at the time included violin, cello, flute, clarinet, oboe, bassoon and serpent. Free reed instruments, such as accordions and concertinas, and brass are also mentioned.

As well as performing their popular themed costume shows, they play for dances, present workshops and provide rural sounds for all kinds of public and private events.