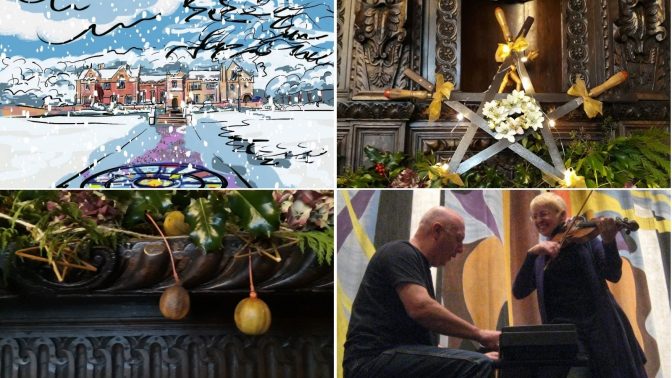 To be confirmed. Please call for information.

Arrive a day earlier for the Dinner and Folk Dance, Thurs 22 Dec:

Come and enjoy the Christmas celebrations at Halsway Manor in the company of your MC Gareth Kiddier, who will be cooking-up a fine programme of festive delights with plenty to keep you entertained!

Click here for a sneak peek at the programme: Halsway Xmas 2021

Everyone who would like to have fun at Christmas!

Gareth Kiddier (piano) has been playing on the folk dance scene for in excess of 15 years and is a passionate dancer, all of which shows in his driving rhythmical support of the dance tunes using well considered harmonic chords. When not with ECDB, he may be heard playing most weekends of the year with PolkaWorks and other occasional line-ups.

Geoff Cubitt is well known as a caller for American Squares and Contra and English Ceilidh and is well respected among his peers. He has considerable experience as a dancer himself, particularly in Appalachian dancing, performing at many festivals. His experience as a dancer stands him in good stead when calling, as his sympathy with those on the floor means that he is helpful to beginners as well as extending the expert dancers.

Linda Game (fiddle) has been playing folk based music for over 20 years since she escaped from the Classical world! In addition to being fluent in a number of styles she is able to take tunes into another dimension with her stunning improvisational ability and rhythmic sense, making her a particularly exciting dance musician! Over the years she has worked with the American Appalachian dance team Broken Ankles and pursued other American styles – Cajun, Texas swing, Old Time – with the band The Kitchen Girls. In addition to other projects she currently plays with The Fold, a Brighton based, international Folk Rock band, and until very recently with the acclaimed contemporary folk trio Zoox (who have now decided to go their separate ways).

Alasdair Paton and Gill Redmond perform as Confluence, an instrumental meeting of cello and accordion. They join traditional music from the UK with melodies from continental Europe, and self-penned tunes. Their music weaves harmonic inventiveness with rhythmic drive, beautiful to listen to and enticing to dancers! We’re delighted that Alasdair will be here for the full event, with Gill joining us to play for the dances on Christmas Day and Boxing Day.

Lynne Render, will be your caller for this years celebration. Lynne has been dancing most of her life and calling for nearly 30 years. She is based in Loughborough but calls for dances, ceilidhs and workshops at clubs and festivals throughout the country. Her particular interest is American but she calls both American and English styles and is always on the lookout for good dances. She firmly believes that a clear explanation will enable less-experienced dancers to join in. During Covid she began writing dances for people dancing at Zoom events. Although this is no substitute for live dancing they were well-received and hopefully gave people enjoyment at the time. Lynne enjoys dancing herself and still loves to watch Appalachian clogging although no longer joining in!