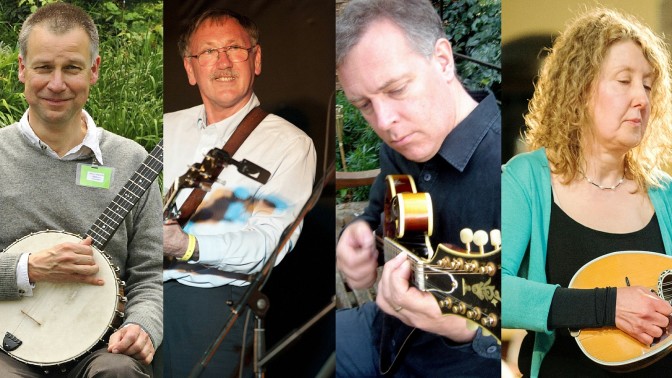 We’re delighted to be hosting the 2016 British BMG Federation Summer School at Halsway Manor – where better?!

The British BMG Federation aims to promote the performance and education of banjo, mandolin and guitar. It is committed to creating educational opportunities for players of all ages to learn and improve on their chosen instruments through running workshops and courses and advertising courses run by other individuals and organizations. For more information click here for their website.

This course will concentrate on improving banjo technique. Participants will study solos and discover how alternative fingerings can improve performance. Also covered will be exercises for development of the hands.

Suitable for: intermediate and more advanced players but anyone with a sound basic knowledge of the instrument and a reasonable insight into playing banjo solos will be welcome. Students will need to be able to read music notation.

In this course students will experience mandolin music with the guitar as the continuo instrument. The focus is to examine the repertoire, technique, style and interpretation and to develop a deeper understanding of the role of harmony and how it affects the shape we give to our music-making.

Suitable for: intermediate and advanced players who are comfortable reading music, and we will use modern mandolins and modern pitch. Music to be studied may incur an extra cost and will be provided in advance.

The classic bluegrass band is formed around banjo, mandolin, guitar and double bass accompanying the singer and then stretching out with ‘hot’ instrumental breaks. Fiddle and dobro play their part too, and sometimes you hear cello, accordion and even drums. But the driving rhythm and core of the band is the banjo, mandolin and guitar. In this weekend course you will learn how the core instruments work together to create the powerful basis of the bluegrass sound. We will look at the common rhythms and accompaniments, the special role and techniques each instrument has, how to support the singer and then stretch out on solos. Gradually we will create a full Bluegrass Orchestra ready to play some show pieces at the Sunday concert.

Musicians who have been playing their instrument for a couple of years or more, who are familiar and comfortable with basic chords and song structures. You don’t have to be a member of BMG Federation to come to this weekend (though you may have such a great time that you then decide to join!). The course descriptions give you an idea as to whether they’re suitable for you, if you’ve any doubt please CLICK HERE to contact Sandra Woodruff for more information.

Chris Sands: Whether as a soloist, composer, arranger or teacher, Chris Sands always has a great passion for whatever he is doing when it comes to classic 5-string banjo. His musical career has seen many highlights, most notably in 1977 when he met British banjo legend Tarrant Bailey Jnr with whom he studied both banjo and alto saxophone. Chris went on to become the maestro’s most outstanding student, regularly appearing with him on the concert stage and on record. On moving to the Lake District in the early 1980s, Chris teamed up with Windermere-based pianist Patrick Sykes. This highly successful duo enjoyed great popularity in many hotels, particularly throughout Cumbria and the North West, playing music for after dinner concerts, weddings and dinner dances, and in 1988 they toured Germany with the International Banjo Festival, appearing in concert with Bud Wachter, Tony Trischka, Buck Kelly, C. Sandy Riner, Lowell & Debbie Schreyer, Peter Meyer and Keith Nichols. Chris took part in all three gatherings of the Tennessee Banjo Institute where he featured in the Banjo Meltdown which was billed as the greatest banjo concert in the history of music. Chris now has a busy teaching practice in the Lake District.

Frances Taylor is Britain’s leading exponent of the Italian school of mandolin playing. She studied under Ugo Orlandi at Padua Conservatoire and was the first non-Italian to do so. She has a MMus (1992 London University) in performance, the first degree to include mandolin performance. Frances works tirelessly promoting the mandolin and has played in high profile venues such as London’s South Bank as well as working with prestigious orchestras such as the Orchestra of the Royal Opera House. An enthusiastic teacher of the mandolin, Frances runs workshops throughout the country. Workshops have included collaborations with the CBSO, SCO, OAE and WBO (2010-14). She also initiated a unique project introducing London schoolchildren to the mandolin (2002-2013). She has been a tutor for EGMYO and a specialist examiner for Trinity Leban Conservatoire of Music and Dance. Frances has appeared on television, radio and in countless press articles. Her CD ‘Italian Mandolin Sonatas’ has been played on Classic FM and she featured in a short film, ‘Serenade’, part of the Random Acts series on Channel 4. Frances has enjoyed writing professionally for specialist magazines (Classical Music and Music Teacher). Her first book, ‘The Mandolin Lesson’, a memoir, was published in March 2014.

Mike Pryor began playing music in 1969 and since then has performed as a semi-professional musician in acoustic-based groups on mandolin and guitar, his main instruments; performances have included television, radio and numerous festivals in UK and mainland Europe, including Glastonbury. With these groups he has recorded mandolin and guitar tracks including BritishBluegrass No.1 SmallTown. Mike has studied mandolin under Mike Marshall, Simon Mayor, John Reischman, Butch Baldassari and Andy Townend; he has studied guitar under Stefan Grossman, John James and Chris Moreton, and double bass under Danny Thompson. Mike has taught private students and has tutored group classes at various festivals, Sore Fingers BluegrassSummer Schools and the BMG Federation Festival in 2008 and 2014.

Richard Holland’s involvement in acoustic music started in the Folk Clubs playing guitar, and it wasn’t until 1987 that he discovered what Bluegrass was all about. The 5 String Banjo became his first instrument and then followed many years spent in sessions and the start of a proper Bluegrass Band. Many years later, he is now a regular around the Bluegrass festivals – playing in four different bands. Richard teaches banjo to a number of students and has been a regular member of the staff at Sore Fingers Bluegrass Summer Schools. As well as banjo, Richard plays guitar and mandolin. In 2014 Richard joined Mike Pryor to tutor the first bluegrass workshop to be held at a BMG Federation Festival.