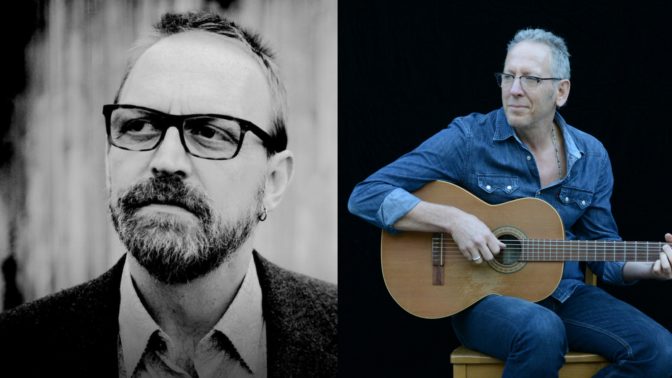 £10 - Adults
£4 - Concessions
Concessionary priced tickets are available to children and students - of any age - in full-time education.

We’re delighted to welcome the extraordinarily talented Boo Hewerdine and Darden Smith to Halsway Manor. To round-off a week teaching the craft of songwriting to others, Boo and Darden will tonight take to the stage to share some of their own music in an intimate gig.

Boo Hewardine is the hugely talented and critically acclaimed singer-songwriter whose cult band The Bible still excites passion in DJs and other music lovers, despite disbanding in the early nineties. Widely regarded as one of the UK’s best singer songwriters, he is one of the busiest gigging musicians around, playing upwards of 200 live shows every year.  Sometimes referred to as ‘a musician’s musician’, his songs have been covered by over 50 other artists. These include Eddi Reader (who recorded Boo’s Ivor Novello Award nominated song Patience of Angels), kd lang, Natalie Imbruglia, Hepburn, Marti Pellow, Swan Dive and Suggs. www.boohewerdine.net

Darden Smith is an Austin-based singer-songwriter with fourteen critically acclaimed albums to his name and a touring and writing schedule that sees him across the US and Europe exploring new and innovative ways to use the craft of songwriting. Smith founded the ‘Be An Artist’ programme nearly a decade ago, and his seminars to encourage students to explore their own creativity and interests have reached more than 15k students across the USA and Western Europe. His albums weave together rock, pop, country, folk and American influences with the musical roots of his home state of Texas.  http://www.dardensmith.com