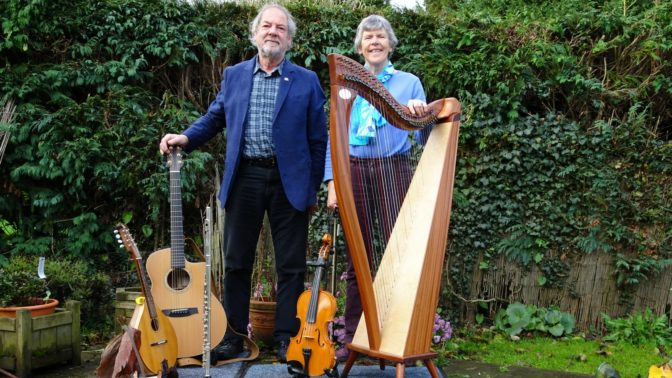 This is a course for musicians – of an intermediate level and above – who wish to develop their arranging skills through ensemble playing. Players of all instruments welcome. This course caters particularly well for harpists, under the dedicated tuition of Moira Gutteridge. Part of the time the group will be split in two, allowing for focused tuition with Moira for the harpists, while all other musicians work with Peter. There will be plenty of time for playing as a full ensemble, to share and try arrangements, and also time to work in smaller groups to devise arrangements based on the skills developed through the course. You’ll also learn and practice tunes for dancing, with one evening taking the form of an informal dance for local dancers, called by Madeleine Smith, who works closely with Moira and Peter to select suitable tunes and dances.

Who is it for

Moira and Peter Gutteridge, are the Worcestershire -based dance band Dampier’s Round. They will be leading workshops as well as playing for dancing. Multi-instrumentalists both, between them they play fiddle, harp, keyboard, mandolin, guitars, flute and whistles. They lead this popular ‘Beyond the Tune’ course together with musician and caller Madeleine Smith – and enjoy helping players of all instruments and abilities to discover and develop their skills by playing together in mixed instrument ensembles.

When they are not playing for dances or running music workshops, they perform concerts in hospitals and care homes for ‘Music in Hospitals and Care’, registered charity whose aim is to bring music from professional musicians to people who are unable to get to concerts themselves.