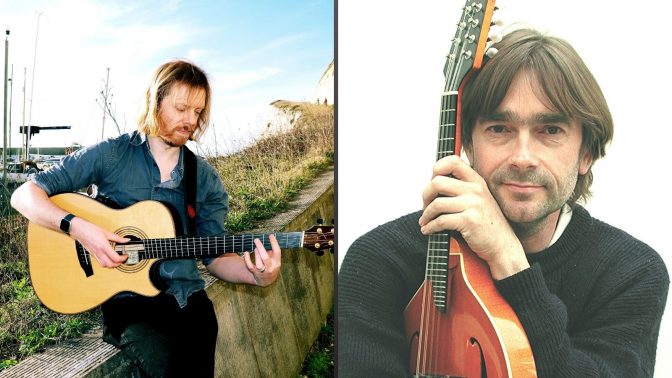 A concert of mandolin and guitar from two virtuoso musicians who are tutoring masterclasses in their chosen instrument at Halsway Manor this week.

BBC Folk Award winner Ben Walker is at Halsway Manor teaching a Guitar Master Class. He was recently hailed as one of ‘the best acoustic guitarists in the world right now’ by Total Guitar magazine. A versatile composer and producer, as well as a celebrated instrumentalist, his passion is putting old jewels in new settings. Ben’s signature style has been sought out from punk to Proms, from Rough Trade to the Royal Shakespeare Company. His solo album, Echo, was released in July 2019 to critical acclaim and his characteristically warm, whimsical and virtuosic solo set regularly delights folk audiences in the UK and further afield.

Simon Mayor is one of the world’s leading mandolin virtuosos and composers for the instruments. He is at Halsway Manor this week teaching a Mandolin Masterclass.  His many faceted career includes his own series on BBC Radio 2, an album in the Classic FM Top Ten chart and causing mayhem at a Canadian humour festival, but maintains his most thrilling moment was a journey through the square window on BBC’s Playschool!

“Evocative virtuosity… uplifting and a joy”   The Daily Telegraph