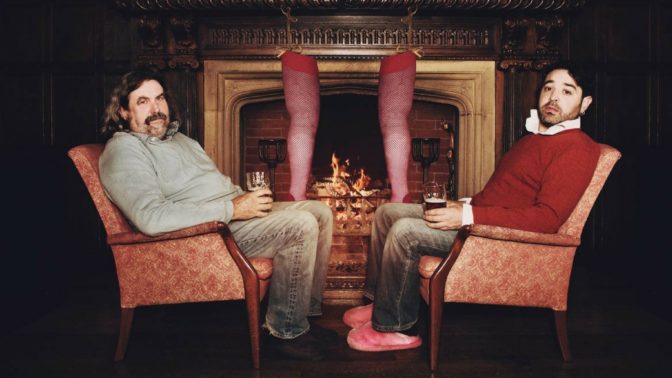 We’re delighted to be hosting a night of music and song in the company of Paul Hutchinson and Paul Sartin, known as much for their wicked wit as impressive musicianship. The duo have been delighting audiences for 20 years, and appear at Halsway tonight to kick-off their UK tour!

‘My personal find of the festival – Paul Hutchinson and Paul Sartin play like no-one else you’ve ever heard. Their music is breathtaking and wickedly inventive and the between-tunes interchange as intelligent and hilarious as the music. But don’t let me give you the impression they’re a lightweight comedy act: they finish the set with a haunting piece of oboe and accordion magic which has the audience spellbound.’  BBC Radio 2 Mike Harding

Paul Sartin is a member of the multi-BBC Radio 2 Award-winning big band Bellowhead and of Faustus. Consultant and Director of the Andover Museum Loft Singers, he is an Artist in Residence with Bellowhead at the Southbank Centre, an editor of music publications, music consultant for The Last Post project, and a BASCA-nominated composer whose commissions include works for the Central School of Speech and Drama, the Choir of Somerville College, Oxford, and Streetwise Opera.

Paul Hutchinson is regarded as one of the top accordionists in the country due to his unique and refreshing approach to playing. He is the Resident Accordion Tutor at Cecil Sharp House, the home of the English Folk Dance and Song Society, and at Halsway Manor in Somerset, the Centre for English Traditional Arts. His keen interest in and knowledge of 17th & 18th century music has resulted in appearances at festivals in the UK, mainland Europe and the USA. Fusion music has always appealed to him since his days in noted Celtic jazzers, Hoover the Dog – now the duo Pagoda provides a vehicle for his own compositions with more than a helping hand from jazz clarinettist, Karen Wimhurst.