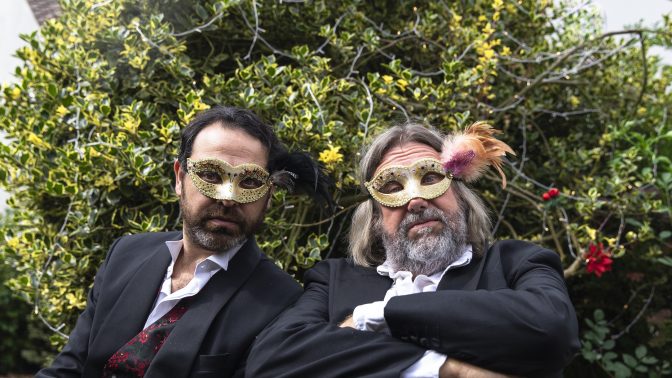 All visitors are expected to comply with our Covid Guidance, click here for details.

Belshazzars’ Feast start with traditional folk music, add a touch of classical and jazz, sprinkle over a few TV and movie themes, and top it off lashings of laughs for a unique live experience. A seasonal treat that sends audiences home with a smile.

Paul Hutchinson (accordion) and Paul Sartin (oboe, violin and vocals), “one of folk’s odd couples”, have for nearly 25 years wowed audiences around Europe, The States and Australia, with virtuoso musicianship tempered by wry humour.

‘Amidst the jesting and hilarity, they sit as fine an example of traditional English folk music as you’re likely to hear.’  Mike Ainscoe, Bright Young Folk

‘There is simply no way that two men in faded denim jeans should be this entertaining!’ Downend Folk Club

Paul Sartin is a BASCA-nominated composer, arranger, performer and teacher. A founding member of the BBC award-nominated ensembles Belshazzar’s Feast and Faustus (German Critics Award 2017), the multi-award winning big band Bellowhead, and Jon Boden & The Remnant Kings, he is also Director of the Andover Museum Loft Singers. His latest publication is ‘Community Choirs Folk’ for Faber Music and Paul also arranged and directed the music for the 2017-18 revival of ‘The Transports’ (Guardian *****). He was awarded a First for his Masters in Traditional Music, and in 2007 received a 75th Anniversary Award from the English Folk Dance and Song Society.

Paul Hutchinson is the founder member of the innovative and progressive folk band, The Playford Liberation Front. His highly successful folk trio Hoover the Dog has recently morphed into the critically acclaimed Pagoda Project. Paul’s own compositions were published in 2012 (Food For Thought) and a second volume is in the pipeline. He is the resident accordion tutor at Cecil Sharp House, is a seasoned tutor at Folkworks and Halsway Manor, and leads ensemble workshops far and wide.