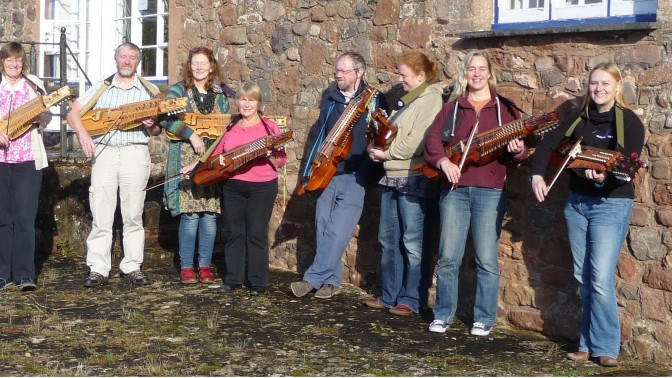 A full-on, fun packed workshop weekend to introduce beginners to this fascinating Scandinavian folk stringed instrument. The Nyckelharpa is gaining popularity and prominence in the UK, largely thanks to the enthusiasm of player and teacher Vicki Swan.

“This was a great course, not only for the teaching, but also for the networking. I met and connected with really fabulous people!” Participant

Anyone! Vicki will even have a number of instruments available for students to borrow; book early as these places are limited to 8. Not sure? For more information contact Vicki Swan 07721 519719.

Vicki Swan is well known across the UK and beyond as one half of folk duo Vicki Swan & Jonny Dyer. Once known mainly for for their instrumental skills with Scottish smallpipes, accordion and Swedish nyckelharpa, they are now gaining recognition as impressive song arrangers and writers.

Vicki, who plays an assortment of less-than-mainstream instruments (Scottish smallpipes, Swedish nyckelharpa, English border pipes, Swedish bagpipes and more) is very much at the forefront of the current surge of interest in the Nyckelharpa in the UK. She plays as a member of the European Nyckeharpa Orchestra, runs Nyckelharpas at Halsway and also teaches internationally at festivals and events.