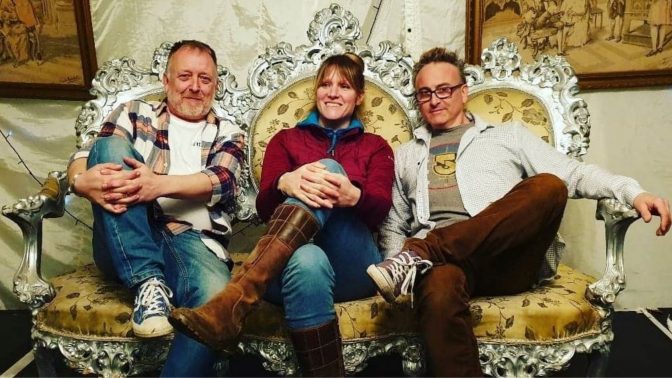 After a year that we would all rather forget, how about a chance to get away for an easy-going weekend of music, song and – we hope! – dance in the company of Banter?!

If you’ve lost your musical mojo, then this is the perfect weekend to ease yourself back into playing and singing. With no specific agenda, this weekend will focus on having fun and sharing our love of folk music and song with each other. Think midsummer folky session party for all abilities. Banter will entertain you with a concert on the Saturday evening, interspersed with party pieces from yourselves, if you wish to do so.

So dust off your instruments and voices, and get booked for this fabulous weekend in the wonderful surroundings of Halsway Manor.

Singers and musicians of all levels of experience and ability. This isn’t one of our regular ‘taught’ courses, but more of a house party / gathering, hosted by Banter, as an opportunity for us all to get back into the swing of playing and singing together. We’ll add a bit of dancing too if COVID-19 restrictions allow. It’s as much about you sharing your music as it is about Banter sharing theirs, so if you’ve a favourite song or tune you’d like to bring along then please do.

Banter are: Simon Care on melodeon, Nina Zella on keyboards and vocals and Tim Walker on drums, percussion, brass, vocals and dance calling.

Three fine musicians who’s roots are firmly in the traditional English genre, but who enjoy stretching the limits.

Formed in 2015, due to a happy accident, they immediately realised their common love for English traditional song and dance and began to mess around with it.

They gained popularity, or should it be notoriety, very quickly and were soon performing at many of the country’s largest festivals including: Glastonbury, Cambridge Folk Festival, Sidmouth Folk Festival and Towersey Festival.

With the release of two albums, YES and DARE, between 2017 and 2019, they received more plaudits in the music press including 4 and 5 star reviews in FATEA, Songlines and RnR Magazines and performed a Valentine’s Day live session on Mark Radcliffe’s BBC Radio 2 Folk Show.

Now firmly established as one of the UK’s finest bands, they have recently released their third studio album THREE, which explores and reimagines a selection of well loved traditional songs as well as a their usual hearty take on some romping dance tunes. John Spiers and Phil Beer appear as guest musicians on two of the tracks.

Although just three people, they create a huge sound and have been described as the world’s smallest big band.