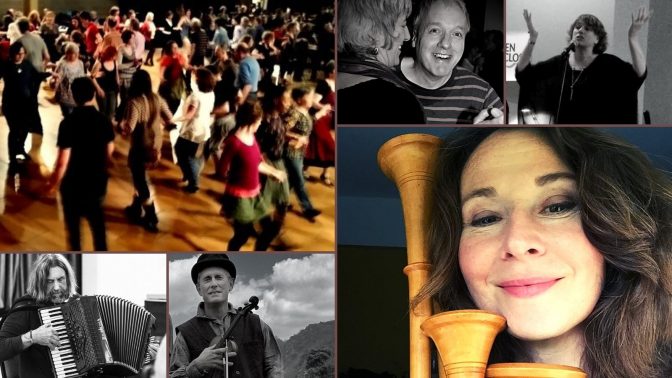 Join us for dancing from 8pm.

Anne Marie Summers is a player of the English bagpipes and general multi instrumentalist best known for her work with long time musical collaborator and gurdy player Steve Tyler with whom she formed the early music ensemble Misericordia and the French/Bretton inspired group The Wendigo which also featured melodeon player Julian Sutton. In the late 90s The Wendigo produced two albums ‘This Fiery Height’ and ‘Dancing on the Sea’, original dance tunes written by the group, many of which have found there way into the ‘traditional’ repertoire of sessions and dances around Europe. Anne Marie has played in many other early music and folk ensembles over the years most notably Jon Swayne’s English bagpipe ensemble Zephyrus which raised the bar for English piping with their performances and recordings of Jon’s masterful compositions The Half Hannikin Variations and English Folksong Suite. These days she works with her voice more often than her bagpipes leading various choirs, teaching music to children with special needs and working for the charity Music in Hospitals and Care. She has recently formed a Jazz trio to perform flapper songs from the 1920s.