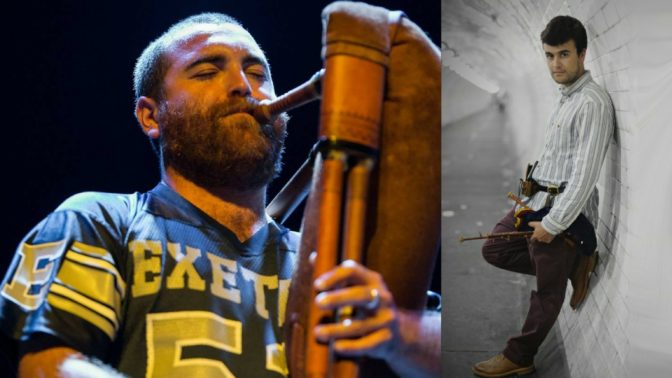 We anticipate that accommodation will be at a premium for this event; please consider sharing a room with friends, booking a bed in a shared dorm, or bringing a campervan/camping if you're an outdoor type! Not only will you save yourself some cash, but it will mean that more people can join the party!

A jam-packed programme of diverse bagpipe playing styles, with some of Europe’s top players. This course runs alongside the Hurdy Gurdy Weekend, in a frenzy of reeds, drones and buzzing things!

We’re delighted to be welcoming French piper Julien Cartonnet (Topette) to lead the weekend alongside UK bagpipe ace Callum Armstrong. We’ll split the group into beginners-intermediate, and intermediate and above, and you’ll spend time working with both tutors. And of course, we will have a bit of fun too!

“I enjoyed the mixture of teaching, socialising, and playing with friends from all over the UK and Europe. This is my fourth year and I intend to come back” Participant

For an extra £35, participants can stay until Monday morning, including supper and B&B. Please enquire at booking.

We are also offering a Bagpipe Taster day on Sat 10 Feb, with David Faulkner and instruments loaned by the Bagpipe Society. Click here for more.

This course will be for players of bagpipes in G or equivalent (europipes), of all ages and abilities! Please note that under 16s must be accompanied by an adult.

Callum Armstrong is an experimental piper who enjoys exploring the possibilities of the pipes. He won the solo prize in 2014 and the ‘Petite Formation’ Prize in 2015 with Cellist George Pasca at the ‘Son Continu’ Festival in France. Callum has recently collaborated with Julian Goodacre to develop a smallpipe chanter with almost 3 octaves, and is currently working developing a technique for the ‘double Scottish smallpipe chanter. Amongst Callum’s current projects are learning and developing reeds for ancient auloi and learning the Musette de cour.

Julien Cartonnet (France) has been playing the Central French Bagpipes since the age of 9. He plays in 16 and 26 inch versions, giving him a choice between a warbling treble and a deep baritone. He has been influenced by playing  Raphaël Thiéry. He continually develops his playing and has mastered the Irish Bagpipes. He also plays the banjo. In 2013 he completed a solo album of bagpipes. He plays in the Anglo-French acoustic dance band Topette.