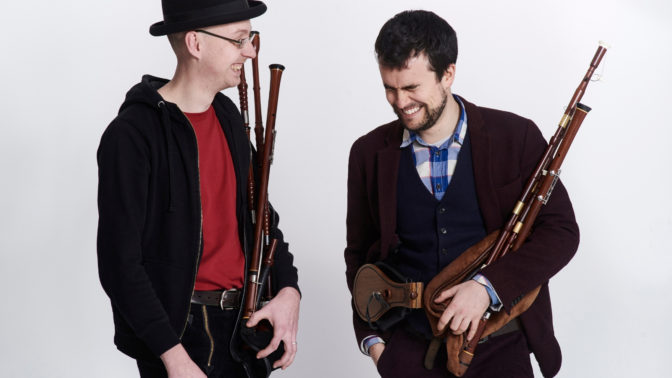 This weekend course runs alongside a melodeon building course run by Emmanuel Pariselle; we anticipate that accommodation will be at a premium, so please consider sharing a room with friends, booking a bed in a shared dorm, or bringing a campervan/camping if you're an outdoor type. Not only will you save yourself some cash, but it will mean that more people can join the adventure!

Callum Armstrong and Matthias Branschke are two of Europe’s most innovative and accomplished bagpipers. We are delighted to invite them to Halsway to lead this intensive weekend focused on playing bagpipes in an ensemble setting. The course will cover writing counter melodies and harmonies, groove, and tips on how to play in a group.

Suitable for Intermediate and Advanced players of pipes in G and D.

Featuring a solo-duo concert from the tutors on the Saturday evening, there will also be time to relax, play informally, and socialise.

The weekend is intended for Intermediate / Advanced level pipers, with pipes – of all varieties – in  the keys of G & D. Please tell us about your pipes when booking a place; we can check compatibility and confirm your place.

The course is limited to a maximum of 20 pipers.

Callum Armstrong is an innovative piper whose questing approach to the hitherto unexplored acoustic possibilities of the smallpipe is taking the instrument into new musical areas.

Some of Callum’s recent projects have been to develop a polyphonic technique for double smallpipes, collaborating with pipe maker Julian Goodacre to develop a chanter with 3 octaves worth of range and developing reeds and music for the ancient greek ‘Louvre’ aulos.

Callum graduated from Trinity Laban Conservatoire of Music and Dance in 2014, where he won the ‘Beryl Maggs’ Prize for recorder playing 3 years in a row as well as winning the Silver Medal in 2014.

Callum has played as a soloist with the London Philharmonic orchestra, as well as appearing in Steven Spielberg’s film Warhorse as the piper. In 2014 he won ‘Le Son Continu’ solo piping competition and returned in 2015 to win the ‘Petite Formation prize’ with his band the Savage Prunes.

Searching for the “perfect bagpipe” Matthias Branschke decided to become an instrument maker. Since 2010 – besides his musical activities – he runs his own bagpipe making workshop in Berlin (www.dudelsackmanufaktur.de).