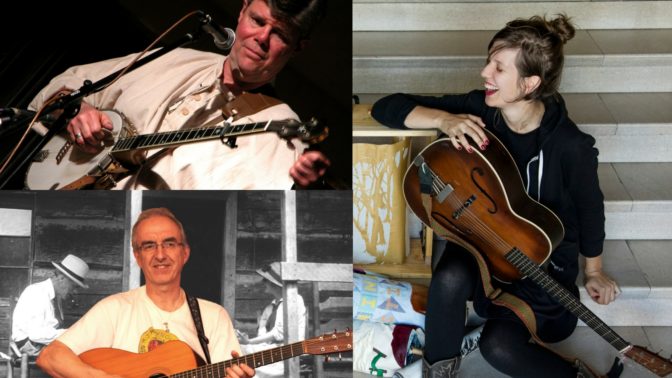 Halsway is delighted to present this extraordinary tutors’ concert as part of a weekend course exploring Appalachian music and song, and celebrating the centenary of Cecil Sharp and Maud Karpeles’ songhunting expeditions to the mountains.

Two outstanding American musicians Anna Roberts-Gevalt, singer, fiddle and banjo player with the sensational duo Anna & Elizabeth, and Jeff Warner, one of the most respected and entertaining performers of traditional song in the USA will be appearing tonight. They are joined by singer and multi-instrumentalist Brian Peters for an evening of Appalachian balladry and music.

Jeff Warner is among the US’s foremost performer/interpreters of traditional music. His songs from the lumber camps, fishing villages and mountain tops of America connect 21st century audiences with the everyday lives–and artistry–of 19th century Americans. He plays concertina, banjo, guitar and several “pocket” instruments, including bones and spoons. Jeff is a founding officer of Folk Alliance International, a producer of the Portsmouth (NH) Maritime Folk Festival and past president of the Country Dance and Song Society. In 2016, CDSS honored Jeff’s dedication to the world of traditional folk music with their annual Lifetime Contribution Award.

“Providing more than just rich entertainment, Jeff will leave you with a deeper appreciation of the land you live in” Caffé Lena, Saratoga, NY

She is lauded for her work with the duo Anna & Elizabeth; what began in 2011 as two artists sharing a love of Appalachian music has evolved into a visionary project that utilizes visual art, movement, and experimental film. Through their immersive creative process and bold interpretations, Anna & Elizabeth are pioneering new ways of understanding old songs and stories.

“…a very special treat for lovers of pure traditional singing and playing, aficionados of the great ballad, and anyone that gets excited witnessing culture carried forward with mastery, love and a profound and real understanding of what makes old material great.” Sing Out Magazine