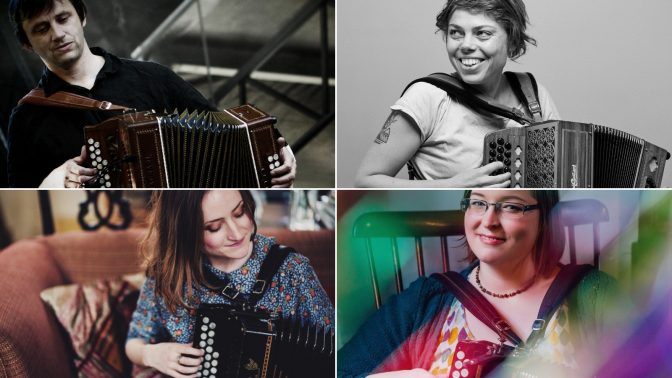 A chance to catch our DG Weekend tutors in an informal concert.

Andy Cutting  needs little introduction. Hailed as one of the country’s most beloved folk musicians and three-time winner of BBC Folk Musician of the Year, Andy is an emotive and engaging performer, and a warm and witty tutor.

A soulful and technically outstanding melodeon practitioner with an ear for a fine tune, as well as a thorough grounding in the English tradition, Andy’s influences extend way beyond these isles, particularly to the music of Central France and to the storming Quebecois tradition. He currently performs with Leveret, with Martin Simpson and Nancy Kerr, plus Blowzabella, Topette, June Tabor, and Roger Daltry.

“Hearing Andy Cutting play is like going through the wardrobe and finding Narnia. His music is glorious, joyful, moving, subtle, emotionally charged, a totally spell-binding experience that is never long enough.” June Tabor

Anne Niepold (Belgium) is an extraordinary accordionist and composer. Anne holds a masters degree in composition and arrangement from the prestigious Brussels Royal Conservatoire and has taught courses for all levels of ability across Belgium, and in France and Germany. As a performer she is a true force of nature – brash, adventurous and phenomenally skilled, she takes the humble accordion in startling directions. Beside her solo projects, she performs with numerous arts companies at home and abroad, and has numerous recordings to her name.

Hazel Askew is a London based melodeon player, singer and musician. She has worked as a performer on the folk scene for many years, most notably with BBC Radio 2 Folk Award nominated vocal trio Lady Maisery and traditional English folk duo The Askew Sisters, with whom she won Best Female Singer at the 2011 Spiral Earth Awards. She regularly runs melodeon courses for EFDSS as part of their Saturday Music Workshop series in London and has frequently taught on their adult, youth and schools projects. Hazel has also led workshops and courses for organisations including Barbican Creative Learning, Folkworks, Aldeburgh Young Musicians, Dartington Summer School, Shakespeare’s Globe Theatre and as well as various festivals around the country.

Mel Biggs is a leading light in the world of melodeon teaching, known for her perceptive, patient and mindful manner in teaching groups and individuals, both on and offline. Having been teaching since 2009, Mel has an ever expanding toolkit of techniques at her disposal which she adapts to every new teaching scenario; expect a bespoke blend of learning-by-ear, call and response playing, analogies, visualisations and pattern recognition, tune deconstruction and notation in moderation. Mel is a consummate performer, vocalist and accompanist and can be seen on stage as one third of Anglo-European trio Moirai and playing for the vibrant Harlequin Morris.