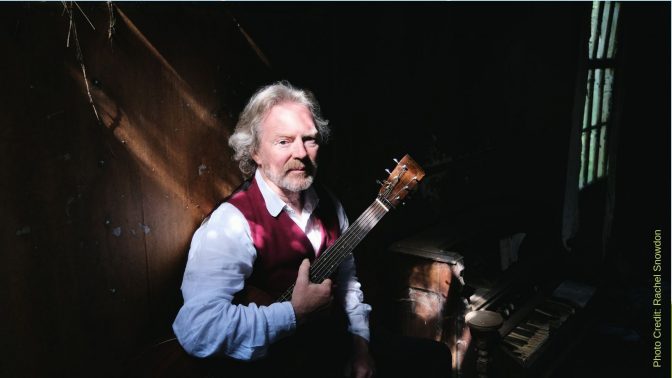 Ticket available from we've got tickets

Reg Meuross, acclaimed singer-songwriter and Folking.com Soloist of the Year 2019, returns to the intimacy of the solo format after a successful Summer of festival appearances and an Autumn touring a full band production of his song cycle 12 Silk Handkerchiefs with support from Arts Council England.

On tour from October 2019 with new album RAW – a record that follows on from Faraway People and December to complete his trilogy of solo works – Reg will be performing new material at Halsway Manor as well as songs of history, protest, love, loss and legend from thirteen previous albums.

A true troubadour and constantly on the road, Meuross has the gift of being able to touch people through his songs and performance, painting pictures that remain with the listener long after the song has been sung.

Masterfully accompanying himself on guitar, harmonica, banjo and dulcimer and captivating audiences with his beautiful tenor voice, witnessing a Reg Meuross performance is to experience a journey into the heart, soul and songs of one of England’s finest writers.

With Support from Holly D Johnston

“One of the most talented storytellers of our generation” Pennyblack Music
“Powerful and moving songwriting” Martin Chilton, Telegraph Music
“A mighty songwriter and an equally fine singer” Martin Carthy