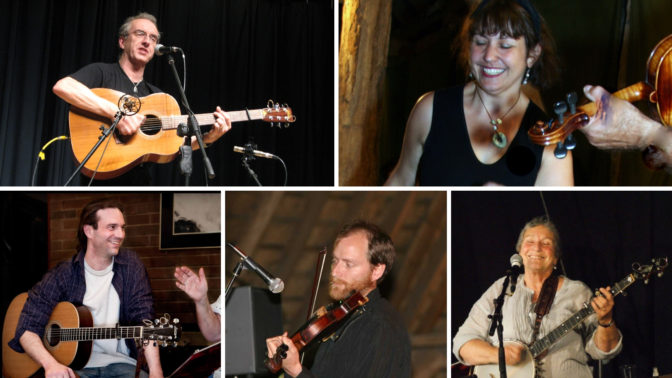 Join Brian Peters and friends for an evening of American traditional music exploring its links with the British folk tradition. Tutors on the Albion to Appalachia workshop will present music from the American ballad tradition, old-time and blues. Appalachia, the cultural region in the Eastern United States that stretches from the Southern Tier of New York to northern Alabama and Georgia, has a lively tradition of folk music. The music derives from various cultural sources including the English folk tradition.

Brian Peters is an expert on traditional songs from both sides of the Atlantic, a fine singer and player of guitar, fiddle and banjo. Sara Grey and Kieron Means, a mother & son duo who play real-deal American traditional music. Sara is an unparalleled ballad singer and banjo player as well as an authority on song migration from the UK to the US. Kieron, an excellent guitarist and singer is continuing in the family trade. They are joined by regular co-musician Ben Paley, one of the finest Old Time fiddle players on both sides of the Atlantic.

There may even be an opportunity to try some dance steps with dance tutor Kerry Fletcher.

More about the artists:

Sara Grey is one of North America’s most respected ballad singers, with a powerful and sweet voice, a wealth of material, and a particular interest in the musical journey between Scotland – where she lived for many years – and North America. She’s also a fine banjo frailer. Sara will be sharing her 60-year love affair with traditional songs and her expertise in their evolution.

Kieron Means is a soulful singer and an excellent guitarist with a unique style, who performs traditional and contemporary American folk song and also has a deep affinity with the blues. As well as a solo artist, Kieron is the son and long-time accompanist of Sara Grey.

Ben Paley  is possibly the best American old-time fiddler in the UK. Ben was steeped in traditional music from birth, his father Tom Paley having been one of the great figures of the American folk revival, and his mother Claudia Gould a well-known singer. He’s toured the US, UK and Europe, is a member of the Long Hill Ramblers, and has played regularly with Sara and Kieron.

Kerry Fletcher teaches English, European and American traditional dance, both percussive and social, and is Co-Artistic Director of Folk Dance Remixed. She has learnt from the likes of Ira Bernstein and Penny Allen and is a former member of Penny’s legendary Broken Ankles clogging team. She brings energy and fun as well as expertise to her classes