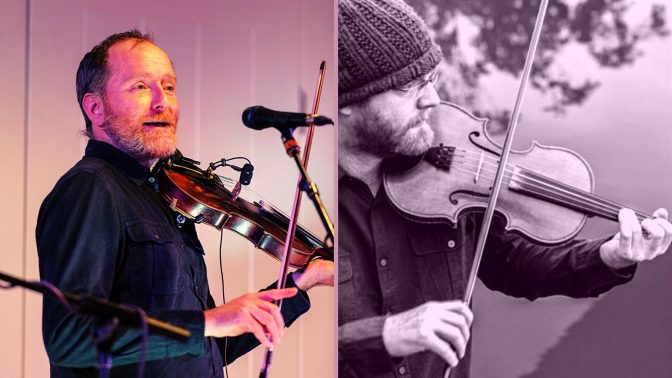 Two amazing fiddle players, Tom Kitching and Ben Paley are coming to Halsway to lead an immersive study weekend aimed at experienced fiddle players who wish to expand on their skills and deepen their personal style. Rowan Rheingans is no longer able to come along to this weekend so we are delighted that Ben has agreed to join this years’ team. Together you’ll learn new repertoire together, exploring ways to further develop tone, technique, musicality and style.

We’ll be a select group, allowing for individual attention as well as full group and smaller ensemble work. You’ll have time to relax and play in the bar in the evenings, with an informal performance from Tom & Ben too.

This intensive weekend is aimed at more experienced fiddlers who want a challenge, to deepen their understanding and go further upon their musical journey. Participants should come with an open mind, a willingness to try new things, a supportive outlook and a willingness to work alone or in small groups. Tuition will be by ear, though written notation will be available to take away.

Fiddle players from musical backgrounds other than folk who would like to explore traditional music are very welcome.

“There are dozens of folk violinists, but few with the attack, passion, and ingenuity of Tom Kitching. The most beautiful instrumental playing of the year.” – The Sunday Express

Ben Paley is both an exceptional performer and teacher of traditional fiddle music and song.
He has been surrounded by traditional music since birth – his father (Tom Paley, a great figure of the American folk revival), mother (singer Claudia Gould) and step-father (Ron Gould, writer on jazz, country and folk music). Ben began playing the fiddle at the age of 6 and cut his teeth in North Carolina USA learning harmony, improvisation, and playing with others, studying with renowned Nashville session musician Jim Buchanan (who’s played with everyone from Jim & Jesse to The Doors). His influences are diverse, aside from forays into Irish music and punk Ben has also authored “Swedish Fiddle Music: An Anthology” now in its second edition.

His current projects include The Long Hill Ramblers alongside Laura Hockenhull and Dan Stewart, English folk supergroup The Servants’ Ball; the New Deal String Band with Joe Locker and Sara Grey; with Belfast-born singer-songwriter Dan Donnelly; and in English dance band The Sussex Pistols, amongst other things.