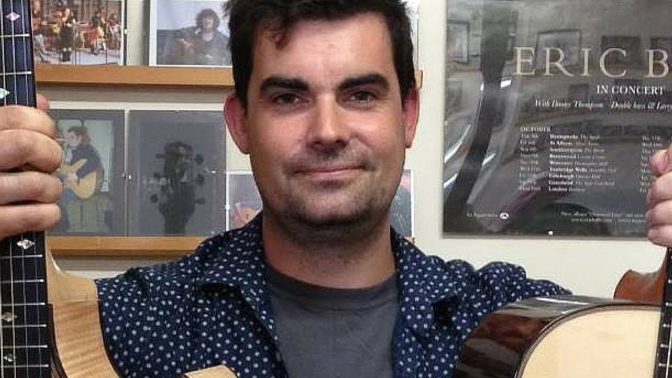 A celebration of the acoustic six string with tons to explore and recharge your creative batteries. Course options will cover many aspects of playing folk guitar: technique, right and left hand exercises, building dexterity, choosing chords, alternative tunings, melody playing and ornamentation, song accompaniment, strumming patterns and tone production. There’ll be opportunities to jam and perform, and the chance to enjoy the tutors in concert on the Saturday night!

This is an outline programme and subject to change. Gavin & Kitty are on hand to support you through the weekend, and respond to what you need or want from the course.

FRIDAY
Arrive from 4pm, grab a cuppa and check into your room. Dinner is at 6.30pm, a nice chance to meet the tutors and other participants before the evening’s main event.

8pm: Singaround/Jam/Open session in the bar. Gav will introduce everyone, and invite each tutor to play something to show a little bit of what they do. You’ll get a chance to talk about what you want to do over the weekend, and you’re welcome to share a tune or two as well. We’ll get the whiteboards out, ready for people to be able to sign up to the next day’s sessions!

Tutor’s concert – 8pm
After which, we’ll retire to the bar for songs and tunes!

Afternoon Finale – 2pm
Sign up for a slot to perform in informal setting or a chance for everyone to play something together that we learn over weekend. Chilled, sociable way to finish followed by…

Gavin Davenport (host) has been playing an array of stringed instruments (including guitar, cittern, mandola , 5 string and tenor banjo) for over 20 years and has played in acts ranging from The Albion Band and Morris On Band to Hekety and Crucible. His no nonsense, no rules approach maximises outcomes using simple techniques.

Kitty Macfarlane is a Somerset-based singer and songwriter. Her lyrics combine honest snapshots of everyday humanity with the bigger questions that have connected minds and voices for centuries, driven by her own fingerpicked guitar. Her debut EP Tide & Time has brought wide acclaim, national airplay on the BBC Radio 2 folk show with Mark Radcliffe, and an extensive national support tour with award-winning duo Kathryn Roberts & Sean Lakeman.

Jenn Butterworth has, for the last 15 years, been building her name as one of the foremost folk guitarists in the UK acoustic music scene.  She began her career performing worldwide with the award winning Anna Massie Band, visiting renowned festivals such as Shetland (SCO), Celtic Colours (CAN), Milwaukee Irish Fest (USA), Tonder Festival (DEN), Cambridge Folk Festival (ENG) and Celtic Connections (SCO).

An excellent collaborator, she has been a key member of high profile folk music projects, including three of Celtic Connections’ New Voices, four years on the BBC Hogmanay Live show as a member of the All Star House Band, and recently a member of folk supergroup ‘Songs of Separation’ involving an array of prominent folk artists including Eliza Carthy, Lady Maisery and Karine Polwart.

In recent years she has performed on ten studio albums, including two as a member of the Rachel Hair Trio, nominated as ‘Folk Band of the Year’ in the 2013 Scots Trad Music Awards.  She regularly performs with Rachel’s band, with 2015 BBC Radio Scotland Young Traditional Musician of the Year Claire Hastings, and Shetland folk superstars Fiddlers’ Bid. She has recently formed a new duo with mandolin player Laura-Beth Salter (The Shee).

Jenn is also a highly recognised teacher with a wide range of teaching experience, and was recently awarded ‘Tutor of the Year’ at the 2015 MG ALBA Scots Trad Music Awards.  She is Lecturer in Practical Studies in the Traditional Music Department of the Royal Conservatoire of Scotland, is a regular member of the teaching staff for Glasgow Fiddle Workshop and runs the Hidden Lane community choir.

“Butterworth powers the show with driving guitar.”  The Metro

Ian Stephenson: Since winning the BBC young Folk Award back in 1999 with 422, guitarist and multi-instrumentalist Ian Stephenson has recorded 4 albums with 422, 2 albums with the Kathryn Tickell Band, 2 with Baltic Crossing and dozens more with other artists including an appearance on multi-platinum selling classical/pop crossover album Will Martin’s ‘A New World’. He has also released albums as a record producer (highlights include Alistair Anderson’s Islands) and as a composer/arranger (Helene Boksle’s Norwegian Grammy-Nominated ‘Morild’). In 2010 he released his debut album, ‘Line Up’ featuring some of the UKs finest folk talents alongside musicians from Sweden and Finland, a project which took over 8 years to complete.

Nowadays he can be seen performing with Brian Finnegan & Aidan O’Rourke’s celtic supergroup KAN, with Anglo-Scandinavian group Baltic Crossing, and as one-third of the Andy May Trio.

Ben Walker is one half of award-winning duo ‘Josienne Clarke & Ben Walker’, winners of Best Duo at the 2015 BBC Radio 2 Folk Awards, and nominees again in 2017. Recently signed to Rough Trade, latest album ‘Overnight’ is available now, with tours in April/May and summer festival appearances planned. Ben is also in demand as a producer, session musician and composer – find out more here.