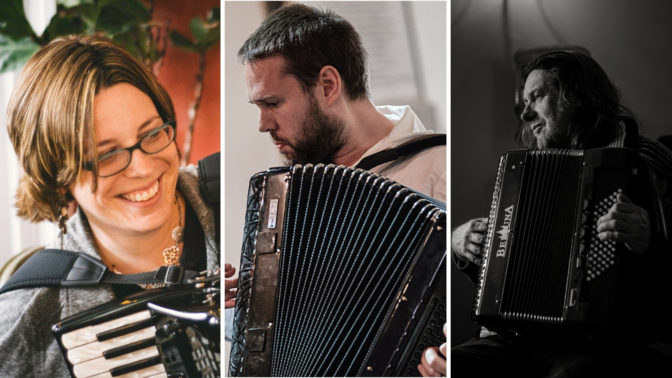 You are welcome to join us and share an evening of music from the piano accordion. Informal concert by our piano accordion workshop tutors, Paul Hutchinson, Murray Grainger, Rachel Bell and Jane Ward.

Rachel Bell is an accordion player, tunesmith, and music teacher from the wilds of Pennsylvania. She is new to Halsway but we are very excited that she is joining us as a tutor for this course as she is rarely home given the demand for her music throughout the United States and beyond. Her musical horizons span a variety of dance traditions from New England contras to English country dances and French dances. Rachel can be heard at dances and on the concert stage with Peregrine Road (with Karen Axelrod) in Alchemy (Eric Martin Karen Axelrod) and in Old World Charm School (with Karen Axelrod and Susan Kevra). She also plays contra dances with Seaglass (with Andrew VanNorstrand and Eileen Kalfass) and recently launched a brand new contra, concert, and French band with Becky Tracy: Eloise & Co. Her debut CD, “Tone Chamber,” was released in June, 2016, an her first album with Eloise & Co. will be available in July 2018. Rachel has also been collaborating recently with Susan Kevra to create a growing collection of English country dance/tune compositions.

Following in the footsteps of Karen Tweed and Paul Hutchinson, Jane Ward took up the baton to lead the irrepressible No.1 Ladies Accordion Orchestra in 2014. She brings a winning combination of fun, frolics, and delicious musical treats to her Halsway workshops, to make your hearts sing and bring a smile to your face. She has also taught at Canterbury Folk Days, Burwell Bash Summer School, and Cecil Sharp House.