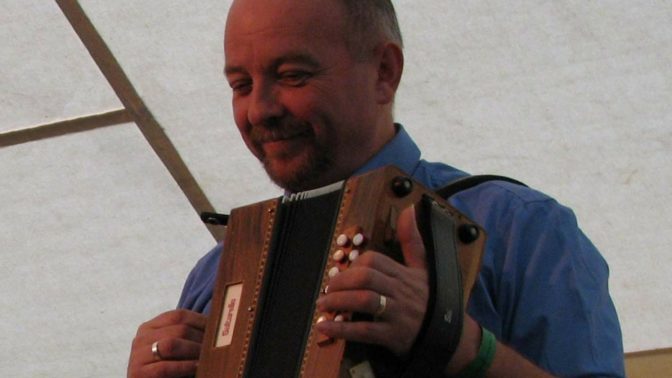 A fun and friendly group for those learning the D/G melodeon. This once-a-month group is led by Ed Rennie, offering group tuition and encouragement. The price includes lunch (1pm).

Ed usually has boxes available to borrow by prior arrangement – contact him on 01363 774426 if you wish to borrow a box, or to discuss whether this group is for you.

Our Improvers group has been running since March 2016. We have been playing a variety of musical styles and rhythms, working across both rows, and playing left hand basses and chords.

Out Beginners group began in September 2017 and are making great progress! They are starting to put both hands together, and to cross the rows.

We are starting a new group for total beginners, dates as follows:
Fridays (11am-1pm, followed by lunch): 9 Feb, 9 March, 6 April, 11 May 8 June and 20 July.
These are for people who’ve never even picked-up a melodeon before!

A founder member of the Devon Squeezebox Foundation, Ed Rennie is passionate about helping people get started – and keep going! He recently published a book and CD ‘The Melodeon Tutor’, a step-by-step approach to unravel the mysteries of the D/G melodeon, and he runs beginners workshops at venues and festivals. For a long time best known as the melodeon player in The Bismarcks, Ed is also a fine singer, and plays bass for the Dartmoor Pixie Band.