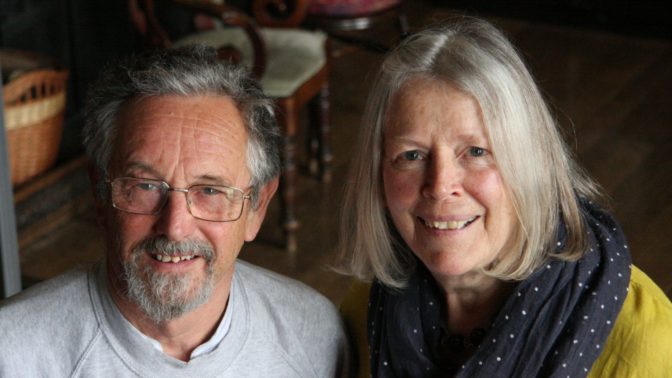 This event is now fully booked.

Bill and Meg are back for a fifth year to host a weekend of traditional song for experienced singers (non-singing partners welcome)! Join them, and friends old and new, for a weekend of singing, archive film and talks. This year Bill & Meg are joined by guests Brian Peters, and Ken Hall & Peta Webb. Bring your voices, instruments and walking boots for an optional circuit of the ‘Halsway Loop’ to blow away the cobwebs! A weekend of sharing memories, songs, and having a wonderful time revisiting those good old days!

Experienced singers of all ages (non-singing partners are welcome). Bring your songs and experiences to share, and have a wonderful time celebrating traditional song with like-minded people in the lovely setting of Halsway Manor.

Bill Crawford was in a  folk club the night Kennedy was assassinated – and on a great many more nights too! An Exeter Folk Club stalwart from the early days, Bill has run clubs and sessions across the South West, and he’s a regular MC at Sidmouth Folk Week. A fine singer with a broad repertoire, Bill currently sings with accapella group The Claque.

Ken Hall & Peta Webb:
Peta Webb, a Londoner with an Irish background, formed her highly-acclaimed individual vocal style through the influence of such Irish traditional singers as Sarah Makem. She believes strongly in the importance of learning directly from traditional singers wherever possible, and has taken part in many collecting trips.

Ken Hall was originally much influenced by people like Bob Davenport, later developing an interest in the Northern Irish singing style of people such as Joe Holmes.

Peta and Ken got together to explore the rich sounds of acappella duet singing, drawing on American styles as well as the British and Irish traditions.They sing regularly at festivals as well as giving presentations and running workshops around songs and singing.

“Individually they are magnificent, together they are superb. They create a sound rarely approached in contemporary folk music” – Keith Summers, co-editor, Musical Traditions Magazine.

Brian Peters is, according to Living Tradition magazine “a top-notch singer and player, also one of the best-researched performers currently doing the rounds, and master of several crafts” while the US folk music magazine Dirty Linen described him as “one of the very best performers in the field of English traditional song and music”.

A true all-rounder Brian is on the one hand a passionate singer able to tackle big songs, and on the other a multi-instrumentalist acknowledged as one of England’s leading exponents of the anglo concertina and melodeon and a skilled guitarist as well. Having begun his career in the folk clubs of England, he’s taken his music to stages all over the world, touring regularly in America, Europe and Australia, but always retaining a deep commitment to the musical traditions of his native country.

Brian believes strongly in the power and relevance of the old songs, specializing particularly in the great ballads of the British Isles, riveting stories set in music:

“I have a new ballad hero: a man who sings these vivid tales as though he read them in this morning’s headlines, a man who loves the ballads and sings with passion. The album is a corker… terrific choice of songs, spot-on vocals, varied and immaculately played backings” Roy Harris, The Living Tradition

Brian is experienced as a teacher and workshop leader, having tutored classes at North American summer schools and English folk festivals on ballads and singing style, and led workshop groups on concertina, melodeon and guitar at countless tutorial sessions.