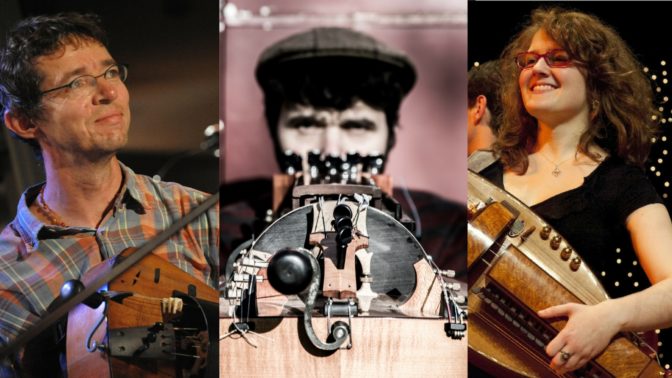 Guaranteed to be one of Halsway’s noisiest weekends, this Hurdy-Gurdy takeover is a brilliant opportunity to get together with some of the best of Europe’s players in an intensive learning weekend of masterclasses, workshops, sessions and a Saturday night concert/dance. This course runs alongside the Bagpipes Weekend, in a frenzy of reeds, drones and buzzing things! Early booking advised.

To the hurdy-gurdy team we are really delighted to welcome Matthias Loibner from Austria – he is considered as one of the very best and most innovative HG players in the world – along with esteemed player Cecile Delrue-Birot from France and the inimitable UK player Joel Turk. The weekend is hosted by Claire Dugué, hurdy-gurdy maker and repairer, and she’ll be available to help people get the most out of their instruments with tips  for maintenance.

For an extra £35, participants can stay until Monday morning, including supper and B&B. Please enquire when booking.

This course will be for players of the hurdy-gurdy of all ages (under 16s must be accompanied by an adult) and abilities!

Cecile Delrue-Birot (France) began playing Hurdy Gurdy in 1998 with Patrice Gilbert in Cric Crac Compagnie. She also learned in many workshops with Gilles Chabenat, Grégory Jolivet, Anne-Lise Foy, Marc Anthony… In 2015 she was awarded a degree in musics from auvergne and limousin in the Conservatoire of Limoges, where she also studied violin with Philippe Ancelin. She continued her studies at the CEFEDEM of Lyon to qualify as a music teacher. She now plays in Maralha (violin and songs from auvergne-limousin), Bresièr (music from auvergne and brionnais), Torgnole (noise music), Les Sœurs Michel (« et Trululu voilà l’beau temps »), Tazon (chabrette and violin).

Joel Turk started playing the Hurdy Gurdy twenty years ago. He was making a living busking, after spending a year studying Indian classical music – he was broke and somebody said that a hurdy gurdy was “a licence to print money”. They lied. What was true however is that it took Joel all over western Europe, playing at festivals, going to out of the way places and meeting musicians from all over the continent, swapping stories and music. He settled in France and spent a few years playing on the Bal circuit with Red Dog Green Dog, Zef and various ephemeral outfits whilst working as a hurdy gurdy teacher for the Ecole de Music et Danse des Landes. Joel still loves playing music for dance and divides his practice between this and more contemporary technique nerdism which he does in a small dark room where no one can hear him. When Joel teaches he likes to concentrate on left and right hand technique and tricks, how to put the two together and using traditional music as a springboard for improvisation. He believes that the inherent restrictions of the instrument are the key to its limitless potential.